We all know the traditional food pairings with Champagne. Arthur Lambert, a student at the Ecole de Design in Troyes, decided to use a still unusual one for a project but it’s not for the fainthearted.

Les Champagnes de Vignerons had the idea for a competitive exam. They wanted a new promotional accessory for their members Champagne. This challenge was given to 18 second year students at the design school. They worked on their different projects for two months.

Less than half were then chosen to present them to a jury in Epernay earlier in June. These included a plastic Champagne carrier corks with confetti inside them and a board game. The jury tried Champagne ice cream and were also given something quite different to eat.

Arthur seems to have been inspired by the recent trend in entomophagy or insect eating. They have after all six times more protein than chicken. Top restaurants are serving them on their menus. Laithwaite’s Wine prepared a top 10 pairings list in 2014.

Tarantulas go well with chardonnay and scorpions with pinot noir. His project was entitled Eat the Eater. He presented a simple wooden box with dried insects inside in sachets. Pepper seasoned crickets or herb seasoned mealworms are said to go well with a brut Champagne. The seven member jury hesitated to explore these Champagne/insect pairings but quickly found them a winner.

Read the rest of Jon Catt’s aricle on glassofbubbly.com

As last week was National Insect Week (UK), FoodIngredientsFirst takes a closer look at insects as an alternative protein, other nutritional values and today’s progression of entomophagy into the western world.

In 2013 the United Nations Food & Agriculture Organization stressed that a new approach to food production was crucial if we are to avoid future shortages. Their suggestion was edible insects. It is their sustainability credentials that has lead the UN to highlight insects as the potential future of food, requiring minimal resources to farm and producing substantially less waste than conventional livestock.
Around 2 billion people around the world already consume insects as part of their regular diet due to their high nutritional value, versatility and flavor. The planet’s population is expected to exceed 9 billion by 2050, and current food production will need to almost double. The human consumption of insects is something which has been widely accepted in many parts of the world including China, Thailand and Japan.
Despite the obvious benefits, the western society is yet to adopt the practice on a large scale, but this may be set to change in the next few years.
A growing number of entrepreneurs and researchers in the UK have been looking into our aversion to insects in the food chain and how they can change our minds. With the influence over farming R&D and investment, the UK may well play a pivotal role in developing the infrastructure behind insect farming for the benefit of future generations.
The Woven Network is the UK consortium for Insects as Food and Feed – with a focus on connecting businesses, researchers and others working on the role of insects in the human food chain. The Woven Network have a number of initiatives put in place to promote insects as food and feed.
Read the rest of Elizabeth Kenward’s story in FoodIngredientsFirst

Around 2 billion people across the globe include insects in their diet.

According to a 2013 report from the Food and Agriculture Organization (FAO) of the United Nations (UN), around 2 billion people worldwide eat insects as part of a traditional diet – a practice known as entomophagy.

Beetles are the most commonly consumed insect, followed by caterpillars, bees, wasps, ants, grasshoppers, locusts, and crickets. All in all, more than 1,900 insect species are considered edible.

Entomophagy is a common practice in many parts of the world, including China, Africa, Asia, Australia, New Zealand, and some developing regions of Central and South America.

In the Western world, however, it seems bugs fail to tickle the taste buds; a study published last year in the Journal of Insects as Food and Feed found that 72 percent of Americans are unwilling to consider eating insects.

An exciting article in the Guardian on the increase in bug production in the UK.

It talks about the UK’s 1st cricket farm in Cumbria, a partnership by the eatgub guys and Howard Bell.

The article mentions Edible bug farm who farm mealworms. The Brighton Bug Boys who are working on modular, phone box-sized insect farms that can be connected together to make larger facilities. Jiminy’s Cricket Farm in Northampton who is also looking to produce cricket flour.

I hope they get the all clear for their cricket farm as it could lead to lower cricket flour prices which is good for everyone. 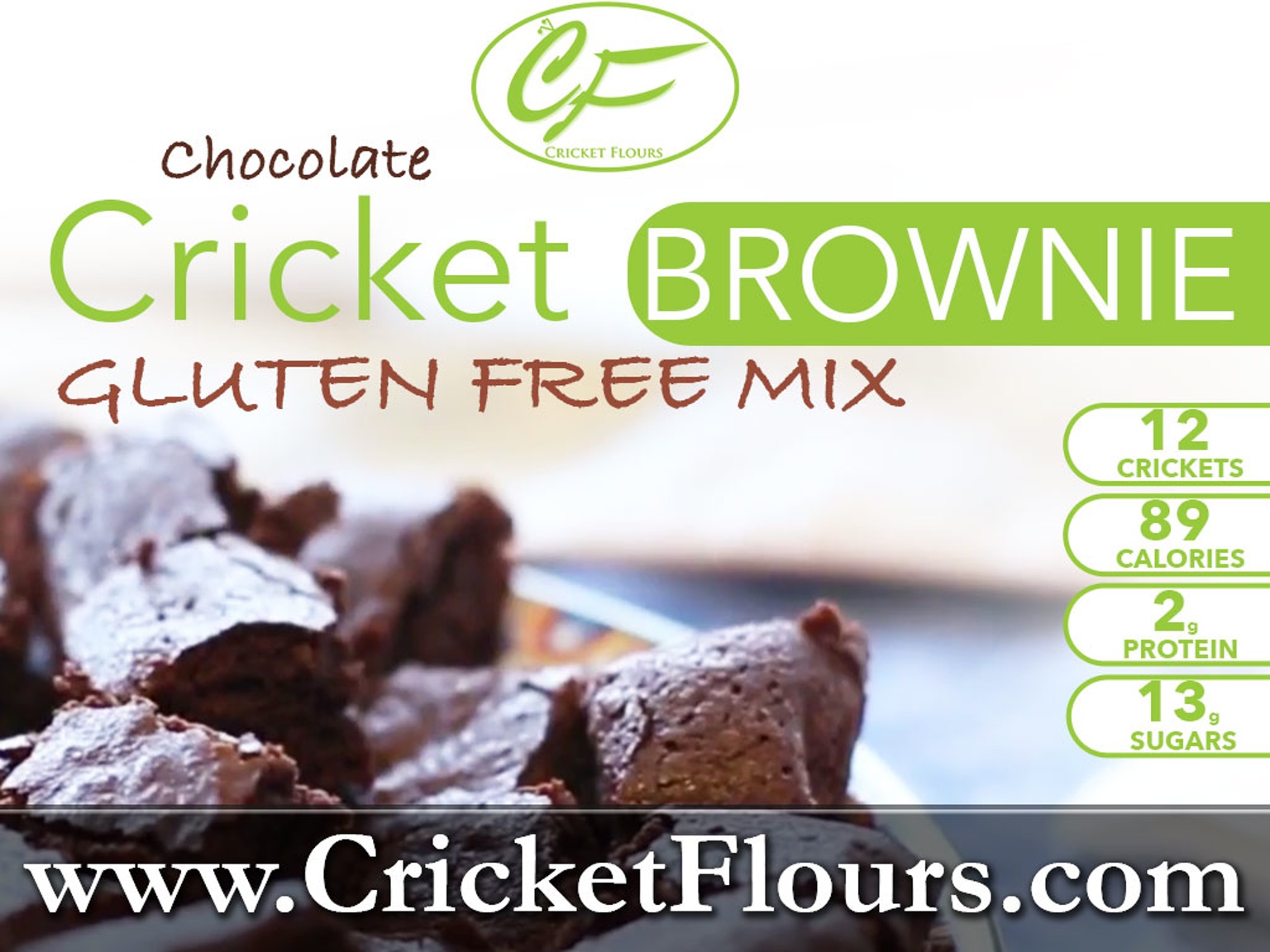 Congratulations to all of the guys at Cricket Flours who managed to successfully raise over $25k and get their Brownie mix funded. 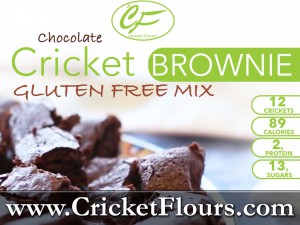 “Thank you so much to everyone that has pledged and backed this project to make it a reality, and thank you for sharing the link and telling your friends/family.  It truly means the world to our team!

We have started to get in a few questions from our backers asking about adding on the tshirt/hoodie orders and what sizes they want, so we just wanted to send out an update to let you know that we will be following up with an email asking for sizes and to confirm your shipping addresses as well at the end of the week once we finish our project in JUST 12 HOURS!  We can’t say thank you enough for making this happen.

As we enter the final stretch, we just wanted to let you know that this is your final chance to check out our new rewards and add to your pledge to get our Kickstarter exclusive apparel for the new tshirt and hoodie.  We have rewards you can directly back, or you can go in to manage your pledge to add an additional amount to get your original order with the new apparel!  We also just unlocked our 1st stretch goal for if we hit $30,000 so make sure to share our project one last time, and let people know which reward you chose so they can try it for themselves too!  The new flavor will be a Chocolate Cayenne Cricket Brownie Mix.  If we hit our stretch goal, then we will let you choose which flavor you would like before we ship, and you will be able to mix and match as well!”

Well done guys another its good to get another cricket product out there.

Are you going to the Northeast PA Home Showcase at the Mohegan Sun Hotel and Convention Center, Route 315, Plains Township between March 4th and the 6th???

if you are you have the chance to sample more than just home improvement advice by visiting the “Pestraurant” stand and perhaps taste some of the items that they have including crickets, mealy worms along with lollipops with ants inside them.

The Pestaurant will also be running a charity cricket eating contest where people can see how many crickets they can eat in an bid to raise local awareness of hunger issues.

“In the contest we’ll have regular, unflavoured crickets,” Wes Rost a representative of Ehrlich, “your local pest control expert,” which is a major sponsor of the Home Showcase said. “For people who are not quite that adventuresome, we’ll have some flavoured ones.”

Burgers made of insects, farmers using satellites to track cows and sheep and personalised meals delivered to doorsteps by drones: these are just some of the ideas of how food could be produced in the future.

A major summit is being held by the UK’s food standards watchdogs this week to look at how changes to global food systems will impact on the country in the next few decades.

Around 200 experts will meet on Thursday at the Our Food Future event organised by the Food Standards Agency and Food Standards Scotland to discuss issues ranging from the impact of climate change and volatile prices, to the problem of obesity and how technology could transform eating habits.

Dr Richard Swannell, director of sustainable food systems at waste reduction charity Waste and Resources Action Programme (Wrap), who is speaking at the conference pointed out insect protein was already being used in animal feeds and there was a range of potential alternatives to meat which may be used for human food in the future.

“We have already got mycoprotein on our shelves, the Quorn approach, but there are other things like algae, such as seaweed, and a range of potential proteins that may not just be for animal feed but also for us as humans,”

A meal of mealworms may seem unconventional, but one environmentally conscious, Hong Kong-based entrepreneur is hoping to change people’s minds when it comes to how they view food. Those people include Chinese consumers, who Katharina Unger, the founder of fashionable mealworm harvesting startup Livin Farms, believes are already on the right track. After all, they certainly have a long history of incorporating insects into foods and medicines, and the fact that the Chinese consumers she’s trying to convince are increasingly captivated by Western health, lifestyle, and design trends helps, too.

The Hive, the mealworm harvesting kit Unger created with Livin Farms, is sleek and simple. Vaguely reminiscent of small, stacked organizational drawers for an office desk, the compact kit enables its user to harvest protein-rich mealworms in their own kitchen, obtaining a sustainable and healthy food source in a small space. Each kit takes about eight to nine weeks to achieve the first harvest, but can produce 200-500 grams of mealworms each week. To complete the package, Livin Farms provides recipes with photos that look like they could have been in the crisp pages of an indie food magazine.

An article on the Natural History Museum’s website with Dr Duncan Sivell,Curator of Diptera, who for one of the museum’s late-night openings, created a wine tasting with edible insects.

During the event guests will experience a selection of insects including giant ants, grasshoppers and mealworms which were matched with a wine which has been chosen to complement the insects taste.

The article can be read on the museum’s website here

An article on 100 Million Years of Food the new book from Stephen Le a Biological anthropologist from the Department of Biology at the University of Ottawa, Canada. The book discusses the evolution of the human diet and some of the topics covered are:

Going through the history of the human diet from our hunter gather days, the first days or agriculture to the ongoing mixed messages on fat and cholesterol.

Le also discusses how insects will become more accepted as a food source in the future, something that he researched in various parts of the globe, where he discovered that the western diet has started to turn people off their insect eating traditions.